Daily Prompt: Playlist of the Week

~ Five songs that represent this past week for me ~

Oh, a music prompt! I love these …

Having given a few moments thought to my week, these are the musical selections that come immediately to mind:

Selection #1 ~ Right here, right now (Jesus Jones) ~ this could easily be changed to Write here, write now as I have felt quite motivated to follow the daily prompt and write every day to get the ol’ creative juices flowing. Having said that, it’s a song that also reminds me to take each moment as it comes, non-judging and totally open to the road that lies ahead, wherever that may lead. Be here, now. Feel and process feelings as they happen and respond mindfully and accordingly. I’m reading a fascinating book ~ Mindsight by Dr. Dan Siegel ~ which is helping me to be even more cognizant of my life in the moment. I’ve made remapping my mind and breaking old patterns of negative behaviour one of my goals for this year, replacing these old ways of being with more positive and holistic ways that allow me to live my life more fully and completely. It’s all good.

Selection #2 ~ Boogie Nights (Heatwave) ~ part of managing adrenal fatigue for the past few years included drastically reducing the amount of exercise I was doing. Over-taxing the nervous system was a bad idea, so karate had to go and my focus had to become gentle (yin) exercises like dog walking, quiet rides on my horse and Pilates. Now that my nervous system appears to be on sounder footing I want to expand my exercise regimen, still, I need to be mindful about it. Since his retirement my husband has taken over dog walking, so what am I left with? I can dance! Boogie Nights, a great disco song from the 70s, starts my Fun mash-up (of more 70s disco and some rock) and I just move to the music. About 20 minutes stretches muscles and gets the heart rate pumping in a way I can manage. I try to do this two to three times per week. So far I’ve gone all disco once this week, but I think today will be a good day to add to that.

Selection #3 ~ Baby, It’s Cold Outside (pick an artist) ~ selected because it’s been &^#% cold outside this week (-16C yesterday with windchill). My horse has an injured suspensory ligament so I go every day to nurse his wound and keep him company, but the barn and arena are not heated so I am, essentially, in a frigid outdoor environment for two-three hours at a time. The art of dressing warm without overheating is lost on me, so I usually end up in a sweater with a down vest over it and my winter breeches, which is not really warm enough. My feet are always cold, no matter what boots I wear or how many layers of socks I don. So, by the time I get home I’m ready for a nice hot bath. I just don’t get warm until I’ve immersed the damp out of my bones.

Selection #4 ~ Ein Deutches Requiem (Brahms) ~ This is what I’m listening to right now, as a matter of fact. As well as being a writer, artist and equestrian I am a singer. Singing was another one of those things I had to let fall by the wayside because of adrenal fatigue. It’s an activity that requires an extraordinary amount of energy to do well and because of the adrenalin involved can tax a compromised nervous system to the point of extreme debilitation. (Just before I quit singing I was working with a coach and attending workshops but had to stop because doing so literally made me sick for days after.) Now that I’m feeling stronger I’d like to (try to) incorporate a structured singing program into my life again. I’ve been spoiled though. I sang in one of the world’s premier large choral ensembles, the Toronto Mendelssohn Choir (TMC), for 12 seasons, and having been raised by an opera singer I’m picky about the quality of singing I lend my voice to. Does that sound awful? Shouldn’t it just be enough to sing? Perhaps, but if I’m going to expend my now precious energy doing something I love than I have to love it. So, in my internet search for a local choral society at 7 a.m. yesterday, I found a local chamber choir that sounds about right. I sent an inquiry expressing my interest and giving some of my background, and received a response telling me I was welcome to try out in March when they would start rehearsing Ein Deutches Requiem. This just happens to be one of my favourite choral works and one I’ve performed many times with the TMC. Is this a sign? I will make my final decision about trying out for the chamber choir once I’ve heard them perform at their next concert on March 1. I’m hopeful. Of course, if I try out they may suppose I’m not right for them. It’s always a risk, but I won’t know until I try. 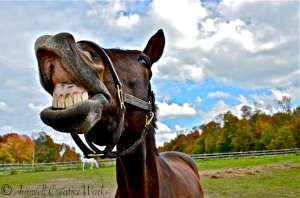 Selection 5# ~ Jump (Pointer Sisters) ~ Yes, from the sublime to the totally ridiculous. Yesterday the vibe at the barn was a bit unsettled and Bear, my injured horse who’s on 120-day stall rest (we’re at day 25) and daily rounds of hand walking in the arena, and who’s been quite sensible about it, had a jelly bean moment. That is, after a roll in the arena footing to get the kinks out (which I didn’t mind because I knew he hadn’t had a chance to roll in a while) he launched to his feet and leapt/jumped/bucked in the air like a Lippizaner stallion. I thought I was going to have heart failure. “You’re not allowed to do that!” I yelled at him from across the arena. “You’re injured, remember?” He just looked at me with an element of surprise and stood there noncommittal. Within moments I finally regained my composure and he walked over to me looking sheepish. He knew he’d abused my trust. We had a good talk during the ensuing walkabout, during which I reiterated how inappropriate it was for him to jump about at this time. If he was allowed to do that I would be allowed to ride him, and I’m not, so he needs to stick with the recovery program and stop acting like a four-year-old. He smiled … he really did … and I couldn’t stay mad at him anymore. Look at that face (yes, a nice summer image). Could you?

So, there you have it. My week in music …

6 thoughts on “My Week in Music”

This site uses Akismet to reduce spam. Learn how your comment data is processed.

Take a look around …

This website and its content is copyright of Dorothy Chiotti © Aimwell CreativeWorks 2019. All rights reserved.
Any redistribution or reproduction of part or all of the contents in any form is prohibited other than the following:
You may print or download to a local hard disk extracts for your personal and non-commercial use only.
You may copy the content to individual third parties for their personal use, but only if you acknowledge the website as the source of the material.
You may not, except with my express written permission, commercially exploit the content. Nor may you transmit it or store it in any other website or other form of electronic retrieval system.
Thank you for your cooperation.

In so many words …